* In case of any delay in receiving the OTP, you may verify it later. Please proceed without verification.

Enter your City name or Pincode

Namrup is a beautiful industrial town located in the extreme north eastern end of Assam. It is situated in the vicinity of the foothills of the Patkai Mountain Range and falls in the Dibrugarh district. Namrup is dotted with beautiful valleys, paddy fields, lush green hills and tea gardens with the Disang River flowing through it. Namrup is bordered by Dibrugarh around 80 kms in the south east and by Tinsukia around 70 kms on the south. 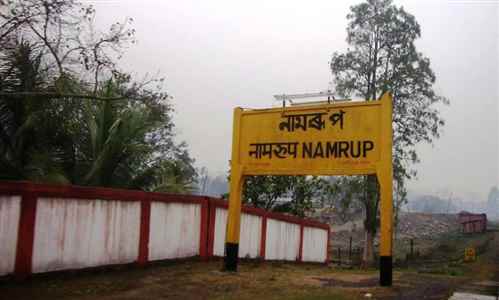 Namrup holds much historical significance during the Ahom kingdom. The first Tai-Shan gave the name Namrup in significance of the two Tai words ‘Nam’ meaning water and ‘Rup’ or ‘Ruk’ meaning five. It is the region of five rivers.  Namrup during the Ahom kingdom was the seat for Namrupeeya Roja, one of the four contenders of throne representing an important clan of the royal dynasty. Again, Coraikhurung in Namrup was used as a secret place for the kings during attacks.

There was also a jail named Koliyapany in Namrup during the Ahom kingdom. The Dhodar Ali which was constructed four hundred years back connecting the then capital Gargaon with Joypur, even today is an important road from Joypur to Golaghat.

The history of Namrup started with the Government of India taking decision of establishing a fertilizer factory in this area during the 1960s.

According to the 2001 census, Namrup had a population of 18,921. The average literacy rate is 87% and the population percentage of males to females is 54% to 46%. The population consists of a multi-cultural mix of Ahom, Assamese Brahmins, Sutiyas, Kalitas, Sonowal Brahmins, Tea tribes and the Tai people.

The economic stature of Namrup is industrial with setting up of industries like the heavy fertilizer factory.

There is also a petrochemicals industry under the Assam Petrochemical Limited (APL) and a thermal power station under ASEB in Namrup. These industries located in Namrup have substantially developed the region building up new hospitals, town centers, commercial areas, colonies and schools.

Namrup also has coal mine quarry near the hilly areas of Dillihghat. These industries engage a lot number of people from the region.  However, the people of Namrup also indulge in tea plantation and agriculture.

The industries of Namrup are a sight to see with their huge estate campuses. Apart from that, the picturesque beauty of Namrup with hills, tea gardens and river banks present a soothing sight to the onlookers.

There is also a beautiful picnic spot named Dillighat with beautiful water banks, forests, tea gardens and river bed rocks by the side. This place is situated on the banks of the Disang River. There are also other places in Namrup like the Namrup Bagan, ASEB Colony, Kheremeeya village, Rangagoraah etc.

Comments / Discussion Board - About Namrup